On Saturday the 13th November 2021 I went to the Kill the Bill rally in Melbourne, Australia. The rally was to the 'Kill the Bill', meaning it was organised to stop The Public Health and Wellbeing  (Pandemic Management) Bill 2021. The bill has already passed the Lower House of the Victorian Parliament. It is to go before the Upper House later this month. I hadn't attend any of the previous rallies and I was feeling a bit guilty about it. I had two friends who were going and I said that this time I was going. But on the day I was feeling a bit lazy, with the weather outside not helping. It was typical Melbourne weather, sunny, followed by rain, which alternated. Then around midday I got a phone call from one of them saying that he and his teenaged son were in the city and asking 'were are you?'

I had to admit that I was still at home but as he was there I would get moving and meet him near Parliament, which is were the rally was taking place. On the way I received another call from my other friend asking if I was going in. I was, he was also running late so I didn't feel so bad now. But it took over an hour to get into the city, the traffic was back to how it had been before the lockdowns. I finally got in, parked at a $10 all day carpark and walked to the corner of Bourke and Exhibition Streets. Which started the game of phone tag between me and my two friends.

I started walking down Bourke Street as the crowd which was to gather at Parliament was heading away from Parliament. No one seemed to know why, but we were happy to do as the organisers wanted. I decided to sit down and wait so that I could catch up with one of my friends. I didn't have to wait long as within minutes my friend and his son had caught up with me. We then stayed together until the rally ended. The crowd was big, very big, easily in the thousands, possibly in the tens of thousands. It's hard to estimate when your on the ground in the middle of it all. 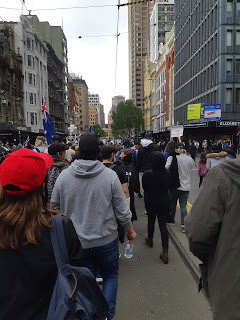 I started to regret my decision to wear a jumper and a heavy coat, but it had been raining when I set out and now the sun was out and it was getting warm. Within 10 minutes of me voicing my concerns it was raining, hard. It continued to rain hard at least three more times during the march, it may have dampened our bodies but it did not dampen our spirits. The crowd was overwhelmingly White, boisterous and very happy to be amongst fellow-thinkers. There were lots of signs and chanting, and whenever a car blew it's horn in support it aroused a great cheer from the crowd. They were happy warriors.

We turned from Bourke Street into Elizabeth and headed down towards Flinders Street Railway Station. Someone joked to me that 'it looks like we're all catching the train home'. But before we reached the station they turned us around and we headed back the way we had come. But this time we went up Collins Street and headed towards the old Treasury Building and then came towards Parliament from the side.

The three of us decided to move back towards Bourke Street which was much less crowded the Spring Street, which is were Parliament and the old Treasury Building are located. We could hear the speakers quite well, although I have no idea why we had to hear some guys bad rap song. The crowd seemed to like the speakers. About 3:30 the rally ended and my friend and his son left, I said that it was good to catch up and then I realised that this was the first time I had seen his son in two years.

Along the way on Collins Street I saw Peta Credlin, the Sky News commentator. On Bourke Street I saw Avi Yemini and his crew interviewing people. After the rally I saw Craig Kelly, the Federal MP who has left the Liberal Party and who has joined the United Australia Party. All of these people were friendly and people could and were talking to them, shaking their hands and getting pictures with them. 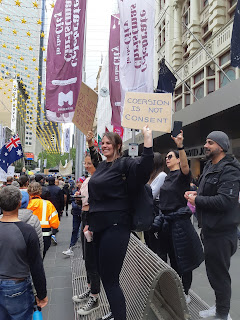 Posted by Mark Moncrieff at 14:22 No comments:

The One Hundred and Fourth Month

Another average month, the only news to report is the disappearance of DforDoom. He has taken down his site, The Politically Incorrect Australian, which is a great shame. Over the years he had written some really good stuff. So I hope he's doing alright.

This month I have had 3,120 visitors with my best day being the 25th October when I had 214 visitors, my worst day was the 9th November when I had only 51 visitors. I had a gap of a week and a half were I didn't write anything. It happens.

The One Hundred And First Month

Posted by Mark Moncrieff at 19:36 No comments:

Lessons For The Right - Criticism And Tactics

Let us imagine that there is an Activist who has called for a protest, he says he is going to shut down this town. He gets a lot of publicity and everyone is expecting something big. But instead it is a total fizzer, the media reporting on the event outnumber the protesters. Here is where the difference between the Left and the Right are revealed.

If he was a Leftist then they simply go silent and if pushed to give an explanation they will deflect, 'you misunderstand his aims', 'this was a call to arms not a call to action', etc. etc. etc. What they never do in public is criticise.

If he was a Rightist then he would be criticised from every corner, 'what an idiot', 'couldn't organise a piss up in a brewery', ' and he's ugly!'. All in public for everyone to hear.

Now this is an area where the Left get it right!

All criticism should be done in private, your Mother is correct, if you don't have anything nice to say then don't say anything at all.

Not because people, causes or events are above criticism, but because you should never be handing the enemy ammunition. Which is what public criticism ends up being. But even worse is it discourages further activity. If this is what doing something is going to get you then why should I bother?

Why should I devote time to a cause or event if all I can expect is criticism for it?

It further discourages people from supporting the wider movement, because they only want to associate with people that they already know and trust. This even extends to the leadership of different groups. To be honest it is an absurd situation to be in. Everything that we love is being abused and destroyed right in front of our eyes and we still cannot unite to defend ourselves, let alone fight back.

Criticism should be done in private and it should be as constructive as possible. The aim should not be to shut people down, as is the current mode, but to help them build a foundation, to improve what they have to offer. Constructive criticism is criticism that can lead to improvement. We need to build up our people.

Every activity that we engage in has to be of benefit to us, that may seem obvious but it isn't. I have seen this over and over again were something is done simply to be provocative. Unfortunately the Liberal system that we live under does not allow us to be free from Liberalism. Any philosophy or ideology that cannot be co-opted by Liberalism will be treated as what it really is, as a threat.

That means that the rules that apply to the Left do not apply to us. The Left is not an enemy of the system it is a part of the system. Which is why it is allowed to do things that we cannot. We will always be treated as a threat to the system and therefore we must always take that into account. Our activities must be of benefit to us. Poking the beast is dangerous.

Do guerrilla tactics, organise in secret, maintain security and fight the enemy were they are weakest. These things are true in politics as they are in warfare. You can see the Left doing all of these things. What you also need is a support group, people who support you in private, but rarely if ever in public. The Left also has this.

The Right needs to get better at what it does, because what we stand for matters!

Multiculturalism And The Holocaust

Posted by Mark Moncrieff at 02:20 No comments: